The English Department has undergone several changes both in terms of the curriculum and its identity. In 1954 the Department was founded with the name Department of English Language and Literature (together with the establishment of Teacher Training College). In 1959 the Department was given a mandate to provide education for lecturers of English with the name English Language Teacher Training Program (ELTTP), which was an additional one-year program for a full degree (or Doktorandus), under the sponsorship of the Ford Foundation.

In 1961 the full degree program was divided into two major streams, Linguistics and Literature, under the sponsorship of the Ford Foundation and the British Council, respectively. In early 1960s, with the policy of the Government, ELTTP was temporarily terminated and resumed in 1971 with the sponsorship from the Ford Foundation. In 1971 the funding for the program was gradually taken over by P3T (The Higher Education Development Project) due to the decreased funding from the sponsor.

From 1967 to 1971 the Extension Course was opened for the Bachelor’s Degree program, and in 1977 the Junior High School and Senior High School Teacher Training Programs were opened. In 1979 the new curriculum of P2LPTK  was effected, which brought significant effects on the Department. First, the Bachelor’s Degree and Full Degree programs, including the ELTTP, were closed and instead the D1, D2 and D3 and S1 programs were opened. Second, minor and major programs for, D2, D3 and S1 were put into effect, each with a minor teaching qualification and a major/primary qualification. Third, the Department’s identity was changed from The Department of English Language and Literature into the Department of English Language Education (1980).

Subsequently, from 1983, 1985, and 1988, the D1, D2 and D3 were one by one closed. In the year 1987 all minor programs were closed except for the students of the Faculty of Education. With the implementation of the PTKSM curriculum in 1992, all minor and Diploma programs were closed, leaving only S1 programs. With this new curriculum, the Department offers special course packages in addition to the standard courses.

The wider mandate applied to a number of departments, including the English Department, Institute for Teacher Training and Education, Malang which fulfilled certain requirements such as the availability of lecturers in terms of number and qualifications. The wider duty of the Department is producing Sarjanas (First Degree Holders) in English Language Teaching and English Language and Literature. This duty has been carried out by offering two programs for Strata 1 or 4-year B.A. since 1997.

To ensure the quality of the graduates of both programs, the Department developed and decided its own curriculum which is deemed suitable with the characteristics of each program, including the development of curriculum which gives the opportunity to the students to take a double-degree program (1999). This development is aimed at accommodating the needs of the students who want to expand their horizon as well as add their academic qualification.

Another effort to ensure the quality of the graduates is through the Intensive Course (IC) program which is compulsory for all freshmen. IC is carried out in the first semester, with compulsory status and as the prerequisite for subsequent courses and academic activities which are carried out in English.

The history of the Department can also be viewed through the development of the Graduate Program (Strata 2 or M.A. and Strata 3 or Ph.D.). Based on the regulation of the Minister of Higher Education and Science no.19, dated July 20, 1962, as of 1968 the Institute for Teacher Training and Education, Malang (at present State University of Malang) initiated higher education for Sarjanas to obtain doctoral degree through the Post Graduate Program, Institute for Teacher Training and Education, Malang. The courses were offered and undertaken through sandwich system, in cooperation with the Ford Foundation. In the subsequent development, this program was integrated into a Doctoral Study program without coursework.

As the realization of the government’s commitment to improving the quality of the faculty members of Higher Education Institution in Indonesia, the Directorate General of Higher Education established the TMPM (Tim Manajemen Pendidikan Doktor) or the Management Team for Doctoral Education (1975), which was a team responsible for doctoral education held both in Indonesia and abroad. In the attempt to improve the quality of the academics in the Teacher Training Institutions, IKIP Malang with IKIP Bandung and IKIP Jakarta were selected to assume the responsibility to establish a Doctoral Program with scholarship.

In 1980 the concept of post-graduate education underwent some development. The development led to the split of the postgraduate program into Doctoral Degree (S3) Programs and Master’s Degree (S2) Programs. Accordingly, State University of Malang opened Master’s Degree Program in Education (1980), Language Education (1980), and Biology Education (1981). In 1981 the Mathematics Education was opened in Surabaya as a credit accumulation activity, followed with the opening of the Chemistry Education in 1985, the Mathematics Education Program in Surabaya was established independently of the Post Graduate Program of State University of Malang.

Based on the Presidential Decree of the Republic of Indonesia No.60/1982, dated September 7, 1982, the Doctoral Study Program was officially changed into Postgraduate and Doctoral Program (PDP). One year later, with the Decree of the Ministry of Education and Culture No.0146/0/1983, dated March 5, 1983, the PDP was changed into Postgraduate Faculty. Then with the Government Regulation No.30, 1990, The Postgraduate Faculty was amended from Faculty to Program, with the name Graduate Program.

From the establishment of the Doctoral Program of State University of Malang in 1968 up to now, five faculty members of the English Department have assumed the directorship: 1) Prof. Samsuri, 2) Dr. Zaini Machmoed, 3) Prof. E. Sadtono, 4) Prof. Soeseno Kartomihardjo, and 5) Prof. H. Ali Saukah.

As the Rector’s Decree No.0682/KEP/H32/AK/2007 on the Management Guidelines for Academic Programs of the Graduate Programs at the Faculty/Department was put into effect, the English Department has conducted a revamping and rearrangement of its curricula encompassing those for B.A., M.A., and Ph.D. to guarantee and improve the quality of the academic activities in all of the programs in the English Department. 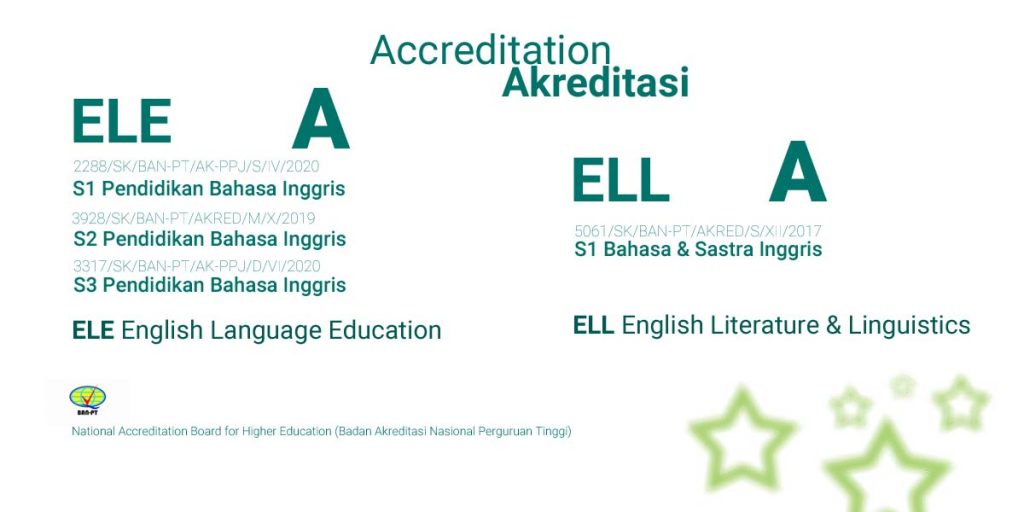 Department of English in Number