Togetherness was felt on the activities held by the Welfare Division of UM’s Department English Students Association. This event held on 1-2 October 2016 get a positive response by the freshmen. One of the positive intentions from the committee is by selecting the best place for this event, so that togetherness among the students can be intertwined perfectly. “It’s a cozy villa to set up close relationship each other” said Mr. Nasrul, one of the English Literature’s lecturers who took his time to come to EFW.

Not only the games were presented by the committee, but there was also a sharing session by Legato’s demissionaries. There was also a brief explanation of the Talents and Interests Division’s activities. One of the most interesting parts was the Maestro English Theater, the only English theater in UM. “The players look professional as well as the totality of all appearances. The performance also attracted freshmen’s enthusiastic in the hall of the villa”, said Wulan, one of the committees. Wulan also added that the games in this EFW successfully entertained the freshmen, in sight of their satisfaction at the end of the event.

In addition, as a form to get closer to new students with Legato, the committee formed YaFriends. YaFriends are representatives of the committee as a friend of each group during EFW activities. YaFriends also helped the freshmen to keep their togetherness by making their jargon of each group. YaFriends also lead group members to prepare an appearance that will be performed in the evening. Each group was given freedom to show anything. Acting and singing were the most taken ones. After having prayers and dinner, it’s time they show their talent. All the eighth groups successfully showed their best performances. The evening was closed by the appearance of Maestro.

Not only setting up close relationship between Legato’s family, EFW also set up with other Students Associations in the Faculty of Letters as many representatives from other departments of the Faculty of Letters came on Saturday night eventhough the weather was not friendly. This proves that they support each other. When the freshmen took a rest, the committees enjoy the night by chatting with others. The committees relieve their fatigue by singing together, sharing stories with others, playing games together, and of course, sleeping.

“It was really fun weekend”, said one of the freshmen. After having exercises and breakfast together, there were games which were quite tiring and draining their brains. Save The King, Spin and Draw, Touch Me If You Can, Terowongan Impian, and Pipa Bocor were the activities that successfully created togetherness among the freshmen. At last, the success of the activities can be seen from the excitement of this weekend. 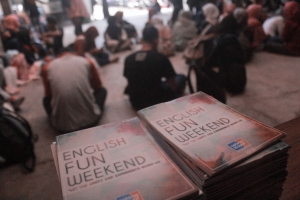 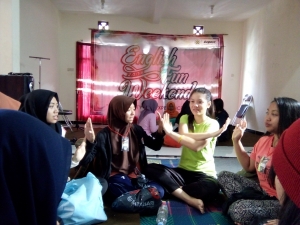 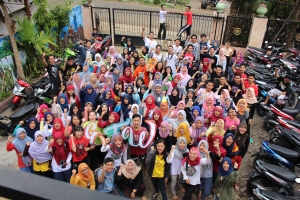 About the Author: Ulfiana Wiyanto