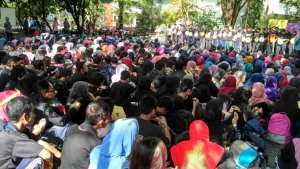 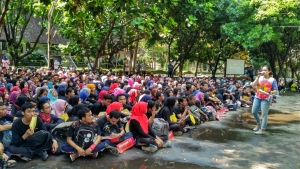 The last week of September must be one of the most interesting week for freshmen of Faculty of Letters, Universitas Negeri Malang. On September 25 2016, all freshmen gathered in front of D building at early in the morning before doing some fun and beneficial activities. We called it as ABS (Abdi Bakti Sastra) which is the new version of BMS (Bakti Mahasiswa Sastra). This ABS still has the same series of events as BMS. Here, the freshmen were asked to bring a white plain shirt that would later be decorated. Also, they have to decorate pairs wooden clogs and later, these things will be given to some mosques in Malang. In addition, they collected books and spread them to communities in Malang. All these activities aimed to build their sensitivity towards their surrounding and make them aware that there are still many parts of our society that needs to be taken care of.
Then, to enrich their understanding about their own department, they were required to paid attention to a socialization session, where they were told and explained about Students Associations in each department. The freshmen really need to know about the Students Association in their respective department since they will get involved and socialize themselves there afterwards.
Another amusing activity they did in ABS was the outbound that required the freshmen to worked together to reach certain goal. By conducting this activity, the freshmen were expected to know each other and able to build a chemistry among students in Faculty of Letters. Well, what makes ABS different with BMS was that the freshmen were invited to make their own T-shirt creation they would prouldy wear in Inisiasi Sastra (the astonishing night where freshmen from each department perform a show).
Finally, we can simply take a value from ABS 2016 Here, the freshmen and other members of Faculty of Letters were invited to be the ones who have postive idealism in order to help this beloved faculty keeps getting better.

About the Author: Ulfiana Wiyanto